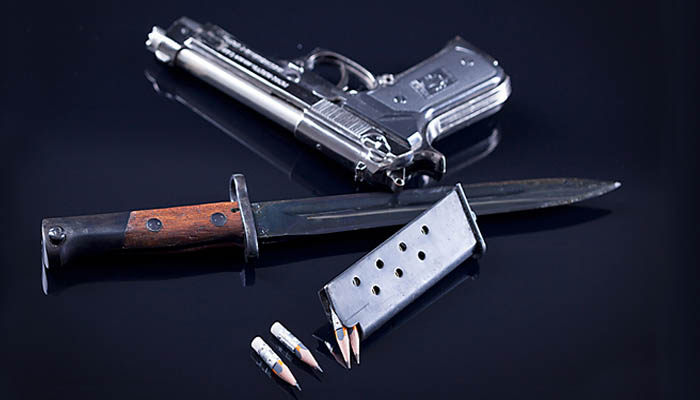 Common weapons offences include charges under the Control of Weapons Act such as possession, use, or carrying:

Common offences under the Firearms Act include:

• Being a prohibited person and possessing, carrying or using a firearm

• Being a non-prohibited person and possessing, carrying or using a longarm or handgun without a licence

• Possess, carry or use an unregistered longarm or handgun

• Possess cartridge ammunition without a licence

• Keeping firearms or cartridge ammunition in an insecure manner

• Possession of a firearm without a serial number

• Owning a firearm without a licence

It is also an offence under the Control of Weapons Act to possess or carry a dangerous article without lawful excuse. A dangerous article includes an item which has either been modified to render it capable of being used as a weapon, or an item which is carried with the intention of being used as a weapon – this can include for example, keeping a baseball bat in the car for self-defence.

If the police want to speak to you about a weapons offence or you have been charged and are due to appear in Court for a weapons offence, contact Ondrik Larsen Lawyers for advice on how best to deal with your matter. We will thoroughly examine all possible defences in your case, and investigate issues of identification, and forensic evidence including fingerprint or DNA evidence, with the goal of maximising your chances for the best possible result.

It is crucial that you obtain the right legal advice before participating in a police record of interview.  What you say in that interview may see you convicted of an weapons offence that you otherwise may not be, simply because you are confused, scared, and do not understand your legal rights.  For more information about participating in a police record of interview click here.